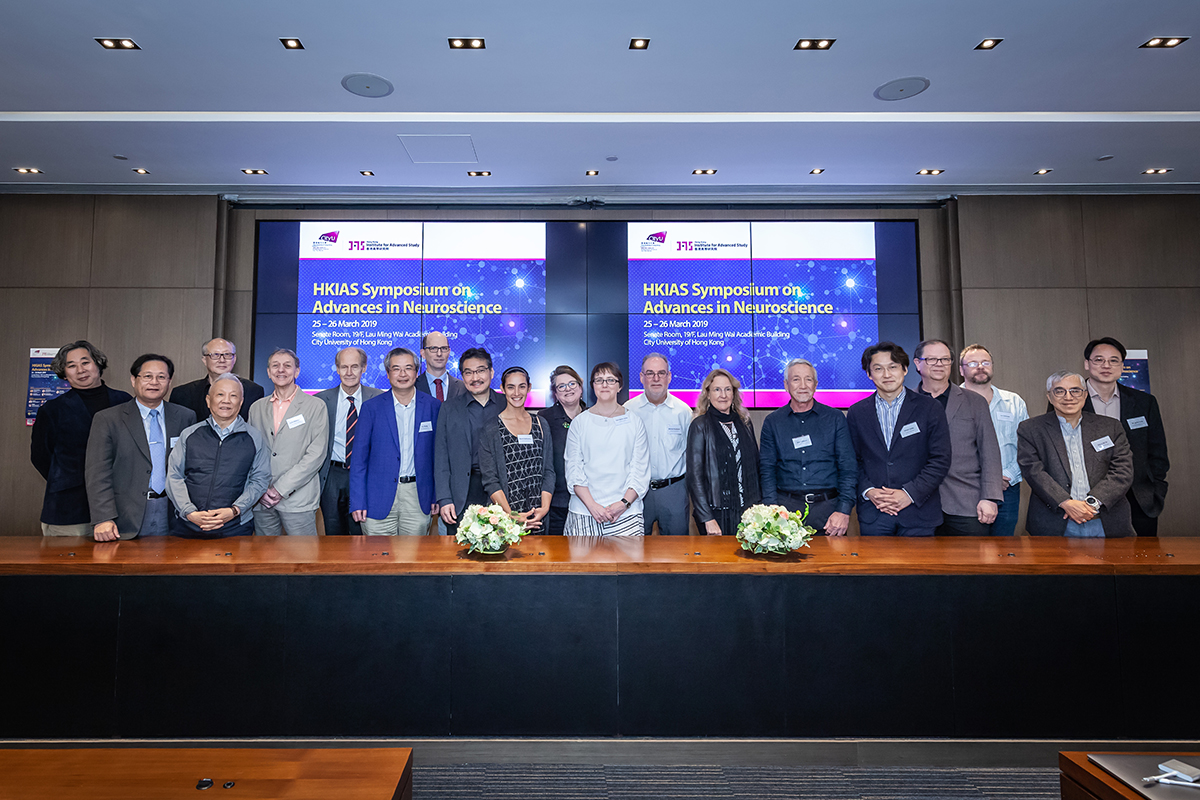 HKIAS Symposium on Advances in Neuroscience hosted by the Hong Kong Institute for Advanced Study (HKIAS) was held at City University of Hong Kong (CityU) from 25 to 26 March 2019. The symposium is organized by Professor Sir Colin Blakemore, Yeung Kin Man Chair Professor of Neuroscience at CityU and Professor Tomas Hökfelt, Professor at the Karolinska Institutet, Sweden, both of whom are Senior Fellows of HKIAS; together with Professor Jufang He, Chair Professor of the Department of Biomedical Sciences at CityU.

The growing strength and breadth of neuroscience research at CityU gives HKIAS an opportunity to take a lead in fostering a real community of neuroscientists in Hong Kong. The 2-day symposium has provided a platform for world-class experts to discuss recent advances in modern neuroscience, to exchange their latest research results in the field and to explore new collaboration ideas together at CityU.

The symposium featured 4 session themes: “Molecular Regulation of Neural Circuits”, “Integrative Approaches in Neuroscience”, “Memory, Ageing and Dementia” and “Sensation, Cognition and Language”. It highlighted the interdisciplinary nature of modern neuroscience, and provided the opportunities for interaction and collaboration between neuroscience and other areas of science, including genomics, engineering, computation, data science, and the humanities.

On 25 March, Professor Masashi Yanagisawa from University of Tsukuba, Japan, Professor Michael Nusbaum from University of Pennsylvania, USA, Professor Jack Feldman from University of California Los Angeles, USA and Professor Moriel Zelikowsky from California Institute of Technology, USA, discussed the work on molecular and cellular mechanisms of regulation in the session of “Molecular Regulation of Neural Circuits”. Professor Masashi Yanagisawa presented a lecture titled “Toward the Mysteries of Sleep”. In this lecture, he shared his research on the mechanism for homeostatic regulation of sleep. He pointed out that several new genes have been identified and they are importantly involved in the regulation of sleep amounts and the level of sleep need. He hopes that these discoveries could be applied in development treatments for sleep disorders.

Professor Xu Zhang from Institute of Neuroscience, China and Professor Hiroki Ueda from University of Tokyo, Japan, delivered lectures titled “Somatosensory Neuron Types and Their Pathological Changes” and “Towards Organism-Level Systems Biology by Next-Generation Genetics and Whole-Organ Cell Profiling” respectively in the session of “Integrative Approaches in Neuroscience”. Speakers suggested using integrative approach to understand and interpret neuronal circuits. Latest research topics related to the development of the nervous system have been elaborated and discussed.

On 26 March, a group of world leading neuroscientists, including Professor Jufang He from CityU, Professor Carol Barnes from University of Arizona, USA, Professor Nancy Ip from The Hong Kong University of Science and Technology and Professor Tara Spires-Jones from University of Edinburgh, UK, discussed the neural development and function of neural circuits in the session of “Memory, Ageing and Dementia”. Professor Carol Barnes gave a lecture titled “Impact of Age on Neural Circuits Critical To Memory”. She illustrated how the brain changes during aging process and explained that the functional consequences of these cell-specific changes are on information processing and memory. Professor Barnes is the Fellow of US National Academy of Sciences and recipient of the 2013 Ralph W. Gerard Prize.

Another renowned scholar, Professor Nancy Ip, delivered a lecture titled “Understanding Synaptic Dysfunctions in Alzheimer's Disease: Insights for Therapeutic Development”. She shared her recent research on two newly identified cell surface receptors as potential drug targets for Alzheimer’s disease. Professor Ip has been honored for her scientific achievements with awards and prizes, including the Fellows of US National Academy of Sciences and Chinese Academy of Sciences.

In the last session “Sensation, Cognition and Language” of the symposium, Professor Tibor Harkany, Professor at Medical University of Vienna, Austria; Professor Jan Schnupp from CityU; Professor William Newsome from Stanford University, USA and Fellow of US National Academy of Sciences; and Professor Sophie Scott from University College London, UK, elaborated their recent research discoveries about brain mechanism of behaviors, sensory perception, decision-making and language. Professor Tibor Harkany delivered a lecture titled “Molecular Interrogation of Neuronal Identity and Wiring in the Hypothalamic Stress Circuitry”. He explained that cannabinoids are shown to adversely impact both the formation and activity-dependent plasticity of neuronal circuits until after adolescence. According to him, this finding also reveals the molecular interrogation of brain’s wiring diagram and cognition development. Professor Harkany is a Fellow of Academia Europaea.

The symposium was well attended by over hundreds of students, faculty members and guests from CityU and outside the university. Participants shared their latest discoveries, discussed their scientific experiences, reviewed the most up-to-date developments, and offered their views on current problems in two days of intensive discussion. HKIAS aims to undertake a leading role in neuroscience research by making important discoveries of international excellence that benefit mankind.

About Organizers
Professor Sir Colin Blakemore is a Senior Fellow of HKIAS, Yeung Kin Man Chair Professor of Neuroscience at CityU and Emeritus Professor of Neuroscience at the University of Oxford. He is specialized in vision and development of the brain and his research focuses on sensory systems, neural development and plasticity. Professor Sir Blakemore has been honored for his scientific achievements with prizes from many academies and societies, including the College of Optometrists Award in 2018, Ralph W. Gerard Prize in 2012, and British Neuroscience Association Award for Outstanding Contribution to Neuroscience in 2001. In addition, he is a member of Academy of Medical Sciences, the Royal Society; and Foreign Member of the Chinese Academy of Engineering.

Professor Jufang He is a Chair Professor at Department of Biomedical Sciences in CityU. He is one of the leading neuroscientists in the hearing research and thalamocortical system, and learning and memory studies. Professor He is also involved in drug development for brain disorders, such as epilepsy, tinnitus, and depression. Besides neurobiology, Professor He has developed an electronic “bat ear” for people with visual impairments and a “motolink” for bypassing the spinal cord injury.

Professor Tomas Hökfelt is a Senior Fellow of HKIAS and Professor at the Karolinska Institutet in Sweden. He is specialized in cell biology. His research interests focus on neurotransmitters and neuropeptides in the brain. Professor Hökfelt is the recipient of over 15 major awards for his neuroscience research. He is a member of the Swedish Royal Academy of Sciences, the Academia Europaea; and Foreign Member of the National Academy of Sciences, USA.

About Hong Kong Institute for Advanced Study (HKIAS)
The Hong Kong Institute for Advanced Study (HKIAS), which was launched on 22 November 2015, aspires to be an international centre of excellence for the advancement of technology and innovation by bringing together an interdisciplinary team of world-renowned scholars and researchers, including Nobel laureates and academicians, to contribute to the solutions of pressing real-world problems. Conferences, symposiums, workshops, and lectures will be organized to facilitate exchange of ideas among academic communities locally, regionally and internationally.